The sextet could have formed a magical jazz band. Innocent would have to be the drummer what with being fat and lazy, with Greg on the double bass – his overlong arms and squat legs made him ideal to handle the instrument, while his ugly face would look cool if adorned with shades. Peter would have a choice of instruments but would no doubt go for virtuoso guitar, sitting down to play as this suggests a more studied approach to music. The three babes would form the brass section and vocals. Hanny would play alto sax, caressing the long slender metal as she oozed each silky note; Nouf the trumpeter would cradle the moon with its bright shiny notes; Thanthat would play trombone and sing with a deep sexy voice that could turn saints into jazz fans.

King Innocent and his Unstable Mates play ‘Blues on Uranus’.

They left the Great Hall with all its attributes – walls and roof and that – sliding off amongst the highways and byways that formed the Majestic Castle of the Fairy Kings of Setebos. Soon they were descending below ground, past the long disused dungeons, past the food stores (Peter was not tempted), and on toward the Magic Cellars of Queen Dillberry.

It was rumoured all over the planet that the Queen dibbled and dabbled in Magic. Everybody hoped that she dealt in Good Magic or White Magic as it is known, though many of the noble Fairy’s wanted to see some of that old Black Magic called love. Was the Queen a Black Magic woman? There are many dark secrets in Black Magic, but we won’t look into them as it may spoil our appetite.

They entered a room filled with bubbling cauldrons, smokes, fumes and strange coloured liquids. The smell was foul; there were bits of animals lying on worktops and odd looking roots were arranged on shelves. There were jars containing potions and powders with strange labels like ‘Mango Chutney’ and ¨Piccalilli´ and ´Gherkins´ and ´Crabs dicks.

“I must have taken a wrong turn somewhere as we appear to be in the kitchens,” said the King.

It took a little more pondering and deliberating but they eventually reached the magic workshop of the Queen. The four Fairy’s had been here on the odd occasion; the King liked to see his Fairy Queen now and again. To the dynamic duo it was a place of awe. There were jars of green and yellow goo on the shelves; sticks; cauliflowers and potatoes with eyes; there were four and twenty years ago, baked in a pie; the were runes and prunes; nuts and bolts; there was a magic dog that made a bolt for the door and a guinea pig that made a run for a rabbit; there were birds that sing and bees that sting, a frog that walks and a dog that talks; they came upon a child of God who was walking along the road; there was a magical mystery tour just waiting to take them away; there were three blind mice training guide dogs; and there in the corner stood the wonderful Queen Dillberry, clearly a salad dodger just like her beloved King, but with a face like a bulldog chewing a wasp.

“Hello love,” said the King, “I’ve brought a couple of the lads around for a pint. Oh and one of them’s got a sore bum he’d like some advice on! Come on girls, get us a drink.”

As the handmaidens searched for a few beers Queen Dillberry looked deep into the eyes of the frightened Pixy.

“I suppose I should shout ´off with his head!’ but I´ll leave that to another fantastic Queen.

“And there could be a copyright problem too,” suggested Hanny, practical as ever.

“Well yes – just copy it if it seems right,” said the Queen.

The Queen pondered and looked askance.

“Off with his head!” she shouted.

“And off his head we have done,” muttered Hanny, “with what shall we do with it?”

“What shall we do with his head when it comes off?” asked Nouf.

“Give it to Lord Chalfont,” suggested the pondered Queen.

“Oh my love, “said the King. “You´re always saying give Head to Lord Chalfont! It´s not really his role to be collecting Heads. He collects taxes!”

The Queen decided it was time to look askance again.

Peter looked upon her doubtfully. Would he lose his head? Quite a price to pay for a Fairy Tart and a sore arse.

“Worry not oh anally challenged Pixy! For I am the Queen Dillberry! Star of the Sea! Mother of Invention! Zapper of flies and Captain in the heart of Beef! I can kill or cure you young Pixy! Choose wisely or the consequences could be fatal!”

“A cure would be best I think your ladyship.”

“You chose well my young friend. Tell me what can ail thee, sprite at arms, alone and palely loitering?”

“Well if you go back a few pages you can see that I´m stricken with the Dukes! Due to having one of your tarts,” explained Peter.

So the Queen read the story so far.

“The Dukes! So the prophecy is true. Praise Oberon and Titania! And Puck and Quince! And a man named Vince! Oh Sweet Gene Vincent! So no more chasing after my beautiful tarts anymore?”

“I might be tempted if they taste of raspberry,” he admitted.

“Saints preserve us!” squealed the Queen. “He likes raspberry tarts!”

“Oh aye!” said the Pixy. “If the most beautiful tart in the world stood before me now, tempting me to lick and munch and drool all over it, I would be able to say No! I do not want my lust turned into a stinging pain down below!”

“Even if it is a raspberry tart?”

Peter thunk it through. Raspberry?

He loved raspberry tarts, though he hadn´t tried many.

He could raspberry tart all day and be happy.

But then the bum grapes would expand.

“No! Not even a raspberry tart!” declared the pitiful Pixy.

“Good! Then I can help. Hanny!” she cried, “go to the cupboard in the back of my bedroom, the black cupboard with all the lovely pictures of hosts of golden daffodils, and open up the Golden Box. In it you will find a garment that will help our stricken companion. Go quickly girl for his arse has a burning ring of fire!”

Hanny returned after a period in which Peter and Greg felt their souls had been read by the Fairy Queen. Hanny held a small package that she handed to the Queen.

“My forbears knew of the prophecy and prepared for such an event. Long ago in the depths of time Queen Spenser sat in the light of the moon knitting her magic into this garment. The garment has the power to relieve a sore arse. I present now to you, troubled Pixy that you are, the magic underpants of the Fairy Queen Spenser!”

“Yup!” said the Queen. “These will give better relief than CO2 or lard. However they must be looked after carefully. Too much time with the magic underpants can be addictive. They really should come with a government health warning.”

“What, like don´t smoke death sticks or drink Brownie Beer?”

“Something like that. Magic in your pants can be a bit bad,” explained the Queen.

“But what do I do oh bog eyed Majestic Queen?” asked Peter.

“Get your kecks off, chuck you lard stained trolleys away, divest your chuff of the semi-liquid lard and put these on. You’ll get instant relief.”

“Could you give me a hand please Hanny?” asked the Pixy in feigned innocence.

“If you want a hand that’s a job you can do yourself!” she said.

When Peter donned the magic pants his life changed instantly. The screeching, searing spikes that had insinuated their metaphorical presence in his rectum were immediately cast out like leftover cabbage. The tight pulsating smouldering sphincter lost its dominating authority in his brain. Freedom surged through his nether regions like a spring tide on a marsh. No longer would he walk in pain, carrying the fear of a leaking bum.

Personal motivation to be the best of the best.

This was the magic underpants effect.

“Feeling better then son?” asked the King as he supped on a glass of brown ale.

“Better! I feel pretty and witty and gay!”

“Now, take care young Pixy,” warned the Queen. “You are using powerful magic; magic that can dampen the dark power of the burning ring. But beware. The magic doesn’t last forever. Those pants will need recharging every now and again if they are to maintain their effectiveness.”

What could she mean by recharging? These pants had instantly rejuvenated his Jacksy – was she implying the effect wouldn’t last?

“The effect won’t last if they aren’t properly maintained, washed regularly and re-energised,” said the Queen.

Hanny looked at the perplexed Pixy in exasperation.

“Didn’t you listen to what her Majesty said? These are Underpants knitted in the light of the Magical Moon. Moonlight waxes and wanes! If you don’t keep them on full charge then the power will wane and you’ll be in pain!”

“Pardon me for butting in,” intruded the gob smacked Goblin, “but how exactly does one go about recharging a pair of underpants, even given that they are magic?”

“You two really are as thick as pig shit aren’t you!” she declared. 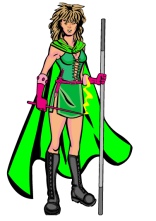 “Look,” continued Thanthat. “The power of the pants will reduce over the lunar cycle. So when there is a full moon you have to recharge them. And before you ask,” she continued, preventing the thickos from interrupting, “the method is quite easy. You drop your trousers and point your underpants clad bottom at the moon.”

“In the world of magic we call this Mooning,” said Queen Dillberry.

Pondering continued for some time until Greg had the courage to ask “Which Moon does he point his bum at? After all there are seventeen.”

“Surely it’s obvious. Oberon, King of the Fairies. Point your bum at that one!”